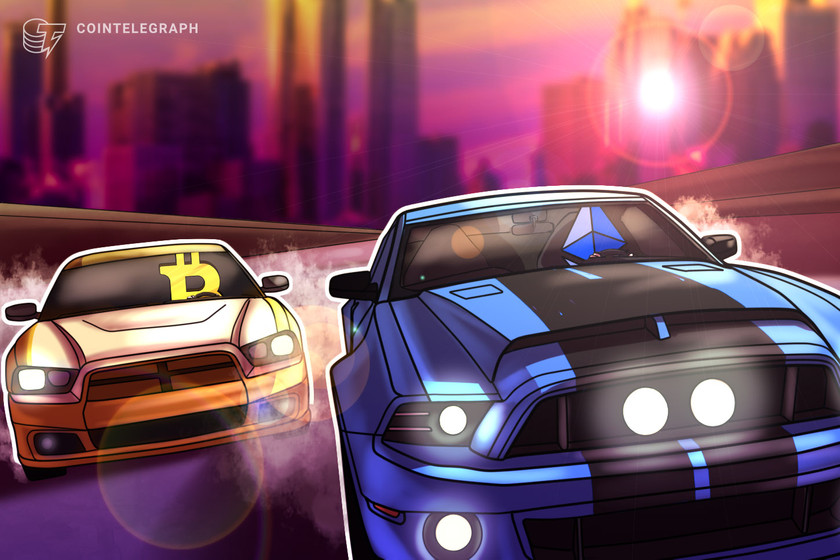 Layer-two scaling protocols for Ethereum have surged in adoption in recent months as gas prices climb again, and the L2 ecosystem is now processing more daily transactions than the Bitcoin network according to recent findings.

According to CoinMetrics data collated by industry analyst and Week In Ethereum News founder Evan Van Ness, there were more transactions on Ethereum layer-two than on the Bitcoin network on Sept. 6. Layer-two protocols processed around 250,000 transactions for the day whereas there were around 210,000 on BTC.

The analyst revealed that StarkWare processed the most for the period with around 143,000 transactions across a number of DeFi platforms such as the dYdX exchange, and the L2 NFT platform Immutable X.

Arbitrum, which launched to mainnet on Sept. 1, had around 56,000 transactions. Its newly launched Arbitrum One platform is already attracting big names in DeFi including Aave, Chainlink, and Uniswap which is exploring several layer two options.

Optimistic Ethereum had around 28,000 transactions for the day according to the researcher. Uniswap deployed its v3 protocol on Optimism in July, it also powers a L2 version of the Synthetix/Kwenta DeFi trading platform.

Van Ness reported that there were a few others th comprising the rest with decentralized exchange Loopring taking the lion’s share.

Bitcoiners pointed out that Van Ness has made a comparison of ETH layer-twos with BTC’s layer-one and provided no information on Bitcoin’s layer-two Lightning Network. Van Ness responded that, “my impression, given the low amount locked, is that Lightning has very little traction but I’m happy if someone shows me data to the contrary.”

Related: Solution to scale Ethereum ‘100X’ is imminent and will get us through until Eth2: Vitalik

Strategy lead at Ethereum layer-two technology aggregator Polygon, “Sanket”, broke down some of the statistics for the network revealing that smaller transactions were dominant. In a tweet on Sept. 7, he stated “45% of all addresses, across all of their transactions that day, were less than $1.45.”

According to L2fees, Loopring remains the most cost-effective platform for transferring Ethereum costing just $0.40 at the time of writing. Matter Labs’ zkSync was around double the cost at $0.83 while Arbitrum One cost $2.75, and Optimism was $5.83 to send ETH on their respective platforms.

Ethereum itself costs almost $11 for a simple ETH transfer, however, Bitinfocharts reported the average gas cost for all transaction types at around $40 yesterday.